I can already see it…rolling into Lot C, Bulldog fans everywhere and the sounds of grills sizzling and beers popping everywhere. Ladies and gents, college football season is right around the corner, and I couldn’t be more amped for another great season of Bulldog and Badger football!

Spring ball has been underway for a few weeks now, but this weekend kicks off Spring Games accross the country. Tonight, the Maroon and Gold battle in Duluth. Wisconsin had their Spring Game cancelled a couple weeks ago, because god forbid Spring actually show up in Wisconsin. I’m here to give my own personal preview of both Minnesota-Duluth Bulldog and Wisconsin Badger football. 2017 Seson Recap
Last season the Bulldogs went 9-3 overall, with a 9-2 conference record. After losing 2 of their first 3 games, they went undefeated for the remainder of the regular season, winning 8 in a row and securing a birth in the Mineral Water Bowl. I can remember the Bulldogs battling that damn injury bug early as they had 2 QB’s fall early in the season, leaving the offense in the hands of Sophomore Quartback, Ben Everhart. Everhart played well, but the offense struggled last season at times to move the ball and relied heavily on the passing game. UMD’s defense was the strength of last years team, allowing only 33 points on their final 5 games, 3 of those games shutouts – all in a row.

The Bulldogs made an appearance in the Mineral Water Bowl where they lost a tough game to Central Missouri 38-28. The Bulldogs are poised for a big 2018, as this Senior class, led by players such as Offensive Linemen Jason Anderson and Matt Juneau. Linebackers Al Helmer and Gus Wedig. Tight End Tyler Lattery, and Wideout Nate Ricci are the heart and soul of this team. Senior leaders are important to any sports team. Look for these seniors to dominate the 2018 season for the Bulldogs. When this guy isn’t pretending to be a Goose flying through the brisk Duluth air, he’s on the field sniffing out the football. Gus “Goose” Wedig had a solid Junior season before battling shoulder injuries and concussions. Gus was 3rd in the team in tackles, tallying 47 total tackles, 28 unassited. He also racked up 1.5 sacks, and 7.5 tackles for a loss. Look for Gus to bounce back from offseason wing/shoulder surgery bigger, badder, faster, and balder in 2018. “#1 Victory Royale” That’s this guys motto, and better beleive their best pass pro call. When J.R. isn’t on the battleground of Fortnite dominating his opposition, he’s burying defensive linemen who get in his way. J.R. started in 9 of the Bulldogs’ 12 games as a Junior, and was named a Team Captain entering 2018. J.R. is going to have a big Senior season, and an even bigger Season 3 and 4 on Fortnite. T-Lat is the MAN on this Bulldog team. T-Lat appeared in 7 games last year, and started 3, racking up 29 yards receiving. Lattery battled injuries last year, but this guy is a one man wrecking crew. Look for him to bounce back stronger this season. I’m predicting 12 Rec. TD’s and 767 yards. Giddy up. 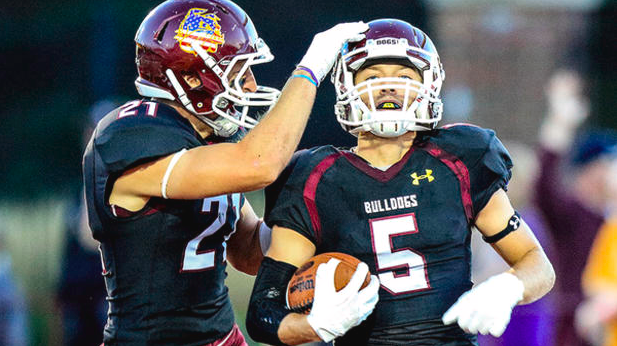 Ricci, like a lot of these Seniors, struggled with the injury bug. Ricci appeared in only 3 games but was productive in those games catching 13 balls for 158 yards and TD. I look for this guy to pull a Randy Moss and “take the top off the defense” in 2018. 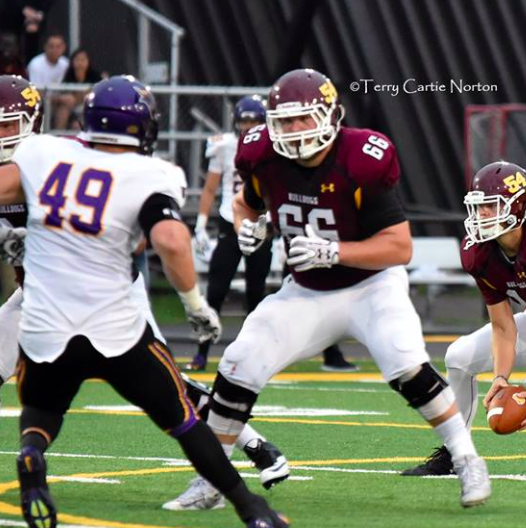 Juneau started all 11 regular season games for the Dogs last year. One of the Bulldogs’ best O-Linemen returns in 2018 with a vengeance.

Where do we start with this freak of nature? Helmer played in 12, and started 10 games for the Bulldogs last season racking up 28 total tackles. This guy reminds me of a bigger and better version of Bobby Boucher, the legendary Waterboy. I predict Helmer to collect 56 total tackles, 4 sacks, and 3.5 forced fumbles in 2018. 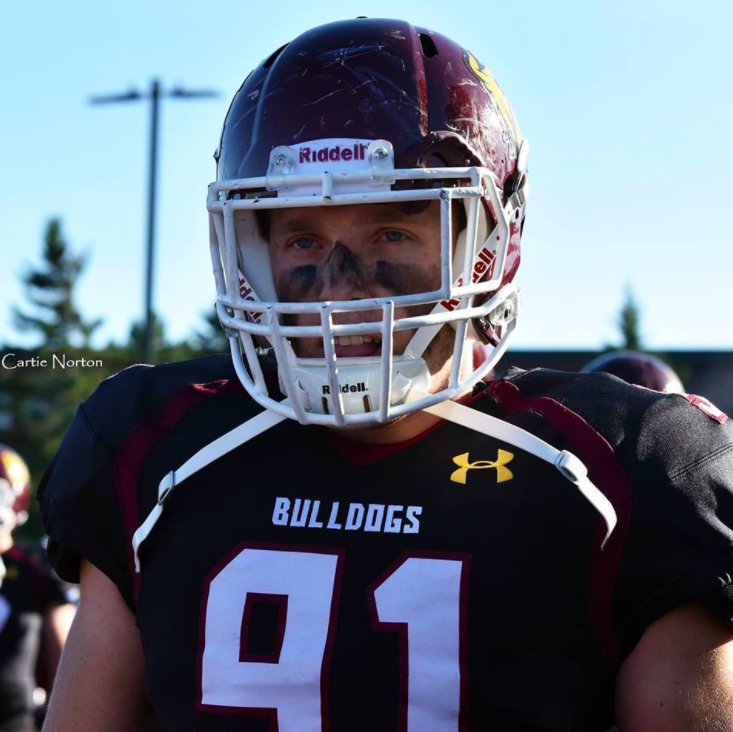 The Tank played in 6 games last season…but you better belive he’s coming back into 2018 looking to terrorize opponets. 2017 Season Recap
The Badgers came off of a record breaking, best season in school history in 2017 going 13-1 and capturing a 2nd straight Big Ten Title. Paul Chryst leads these Badgers into 2018 looking better than ever. Chryst, in his 4th season with the Badgers, has compiled as amazing 34-7 overall and 22-4 Big Ten Record. This Badger team just barely missed out on the College Football Playoffs last year after losing in the Big Ten Title Game to who other than the Fu**eyes of Ohio State. Instead, they strolled into Miami and whooped up on the Hurricanes 34-24 en route to an Orange Bowl Title.

The offense last season wasn’t bad, but it wasn’t great. They ranked 3rd in the Big Ten in scoring, averaging 33.8 PPG, and number 3 in total offense averaging 415 yards per game. But really, this defense was the absolute strength of this team, proving itself to be one of the, if not THE BEST defense in all of America last year. They finished #1 in the Big Ten in scoring defense and #1 it total defense.

The Badgers open the 2018 season on Friday, August 31st against Western Kentucky. I look for this Badger team to have a big 2018 and get into that College Football Playoff for the first time behind Quarterback Alex “Heisman” Hornibrook. 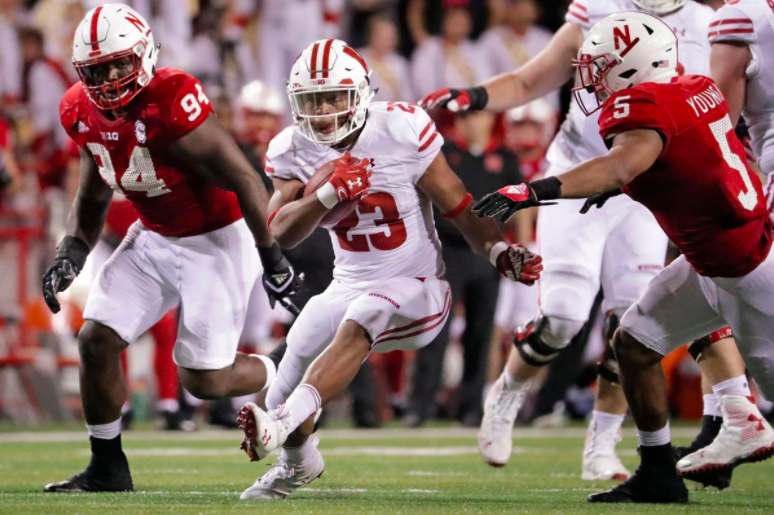 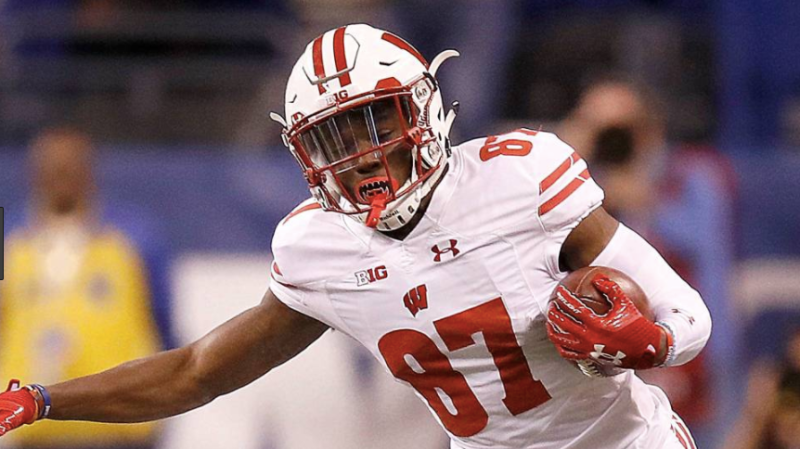 Football season is almost here. Get ready for a great 2018. Dilly Dilly.