Guidelines for the “Flip Back” are simple:

But sometimes, the flip back becomes a cognitive battle within. The other night I was watching Sunday night football. Patrick Mahomes is more watch worthy than most professional teams on his own but they jumped to a big lead. Then, my wife found Airplane! as the flip back. That fits the “I’ve seen it eight times” guideline, but it also is one of those that you rarely see today. I was torn.

But, that was nothing compared to a couple of weeks ago: One Sunday,  Big Rod, Bear, and the Basement Boys, along with a few friends were watching the Packers and the Bills. Many in the group are Bears fans and thought the Bears would be on Fox, the NFC game, because the Bills were the visitors, so that game was on CBS. But for some reason, this season when the Packers play at noon, they won’t show the other game. Just two late games.

Jake tried desperately to watch the Bears game, flipping through channels, watching the game cast on his computer,  anything as Trubisky dismantled the Buccaneers. As the Packers and Bills game was winding down and was getting more and more less watchable, we went back to Fox just in case they were showing highlights of the end of early games. That’s when we stumbled upon the ultimate flip back. 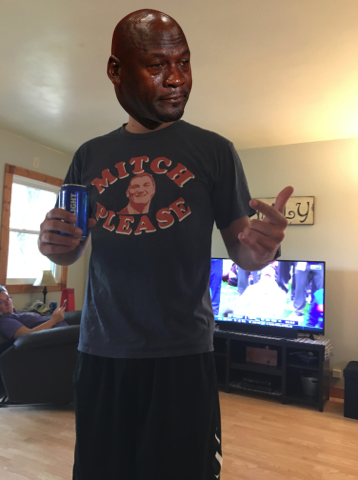 It was wrestling, but not WWE quality. More like the 1980s. It was a three man tag team, six people fighting. You couldn’t tell who was on whose side. Most of them looked like they had been dragged out of the bar across the street the night before. The fake hits were awful. When one guy jumped off the top ropes, all five guys fell even though one guy was three feet away from any contact. It was so awful and painful to watch, we couldn’t turn it. When Jake flipped back to the Packer game, we revolted, the Packer game became the “flip back”.

“Don’t turn it” Smitty yelled as it looked like there was a break in the action. We were mesmerized by this awful but entertaining event. We needed to see who won this fake match. We were cheering, yelling, laughing as the ref would get to the two count and ultimately they would kick out and start another round of massive fake kicks, punches and flying elbow drops.