Two weeks of the AAF season are already in the books, and it’s been nothing short of entertaining. Birmingham and Arizona are both unbeaten. Memphis, Atlanta, and Salt Lake still seeking their first wins. Competitive football in the spring…..what a time to be alive!

Watching these last two weeks have really opened my eyes to some serious talent on the field. One of my concerns heading into the AAF season would be how the talent and competition stacked up against the NFL. Let me tell you, it’s hard to even see a difference. Below are some real ball players to keep an eye on in Week 3.

This dude may just be the most talented quarterback in this league. I’ve watched this San Antonio team play both weeks and they’re fun to watch. One of the main reasons is Woodside. He’s 2nd in the league in passing yards with 478 and completing 50% of his passes. If you get a chance, tune in and watch this kid.

J.J. Watt of the AAF; Karter Schult. Against the Iron last weekend, he balled out. He compiled 6 solo tackles, 2 sacks, and 4 quarterback hits. In only two weeks of action, Schult is putting the AAF on notice as he leads the league in sacks with 3. We were also sitting there watching the game and couldn’t figure out of his last name was really “Schultz” or “Schult.” Bill and the Boys thought they messed up his jersey and forgot to print the “z”. Look for him to keep playing well. I’m saying 3.5 sacks this weekend for Schult.

Rashad Ross was a big time playmaker for the Arizona Hotshots in their Week 2 comeback against the Memphis Express. He had caught 100% of his targets, with 4 catches for 67 yards and a touchdown. Ross also led the Hotshots in receiving in their Week 1 game against the Stallions, reeling in 5 catches for 103 yards. Rashad Ross is currently 2nd in the AAF in receiving yards with 170.

This dude LIT. IT. UP. last Sunday. Everything quarterback Garrett Gilbert threw in the vicinity of Johnson, he somehow managed to come down with it. After two weeks, Johnson leads the AAF with 252 receiving yards and one touchdown for the Apollos. A lot of those numbers came this past Sunday when Johnson hauled in 7 catches for 192 yards, including a game changing 51-yard bomb in the Apollos’ 37-29 win over the Commanders. I loved watching him play last week and I expect him to have another big game this Saturday when the Apollos take on the Express. 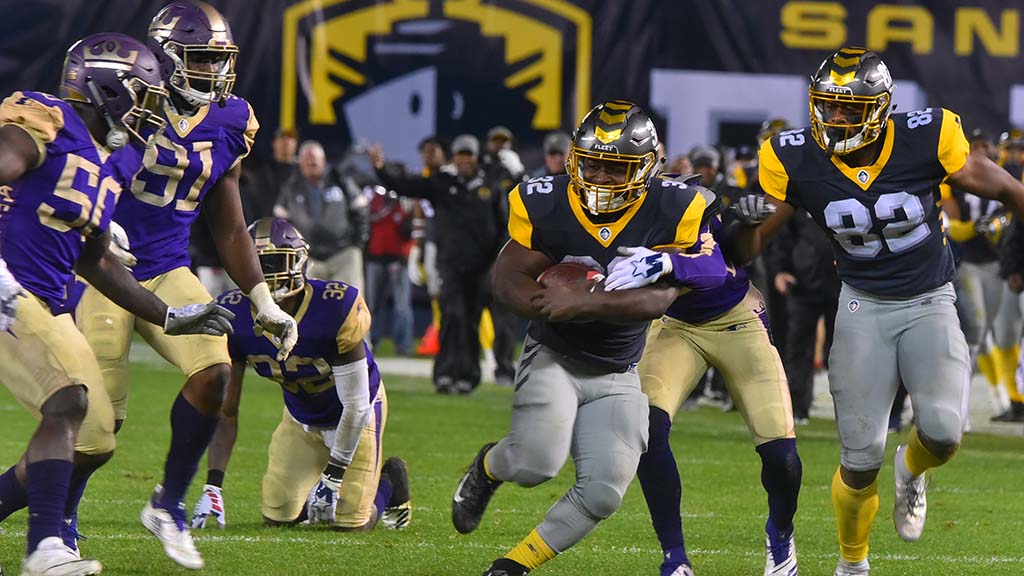 Ja’Quan Gardner had 104 of his 159 total rushing yards in Week 2 in the Fleet’s 24-12 win over the Legends last Sunday. Gardner is tied for the league lead in the AAF in rushing yards with Memphis Express running back Zac Stacy. On Sunday, Gardner was the workhorse for the Fleet.  He carried the rock 15 times for 104 yards and 2 touchdowns. I expect him to carry the Fleet this coming weekend and continue his success on the ground.